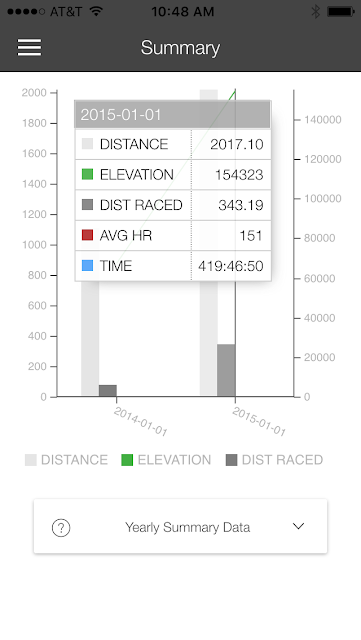 These numbers are a vast improvement over 2014, where I reached just over 1,200 miles. However, it is only my second year of real, sustained distance running, so I can probably expect that I won't have such a dramatic increase, if any, next year.

Races (marathon and ultra distances only):

After the DNF at Surf the Murph, I got my hamstring issues worked out with ART and some very painful Graston, courtesy of Jared Davis, at Eagle Trace Chiropractic.  I won't lie, the treatments brought me nearly to tears at times, but they do work. By January, I was ready to start training, and for realz. Zumbro wasn't going to run itself. And yes, I was scared of it, knowing that Surf is relatively "easy" compared to Zumbro. Despite my fears, I did well, with a pretty slow time, but that's fine. It was my first 50-mile finish and also served as a qualifier for the Superior races, so I was pretty damn happy with it.

A week after Zumbro, I ran the Trail Mix 50K, with a pretty good time for a slower guy. Doing back to back ultras did catch up to me though, and I had to take it easy for a couple weeks. Then it was all about FANS in June.

FANS 24 was tough, and I had to take a 90-minute break to cool off and get my stomach to settle down, but I rallied in the middle of the night and added another 38 miles, finishing with 91.7 total. I wanted 100, but having to take the break put that goal out of reach. I started off too fast (did the first 50K in just over 6 hours) and I didn't have a nutrition/hydration plan. I was overeating and over hydrating, and this led to many digestive problems. I learned so much from FANS. The experience was invaluable. Even though I failed to meet my goal, I gained a lot of self confidence, especially for being able to take on the really long distances. After FANS, I knew that I could do a 100-miler, as long as I pace myself.

The Eugene Curnow Trail Marathon was a blast. This is one full leg of the Voyageur course, (Voyageur is an out and back 50-mile race in Duluth) with an extra mile thrown in to get to the marathon distance. This was my favorite race course that I have run to date. It has a bit of everything. I really enjoyed the variety. Of course the view of Lake Superior from Spirit Mountain is incredible too. I plan on taking on the full package in 2016 (Voyageur 50-mile).

The Superior 50-mile was my main event in 2015. I was worried about the cutoffs, and went into it at less than 100%, coming off a minor calf injury. I ended up far exceeding my expectations and you can read about it in every possible detail here.

Next up was the Twin Cities Marathon. Leading up to it, I had done absolutely zero marathon training at all. All of my workouts throughout the summer had been focused on hill climbing, rather than speed, in order to be ready for Superior 50. What I found is that the heart and lungs really don't know the difference, something that Break the Stigma ambassador Sage Canaday often says. I was able to run the race at a pace that was faster than I thought possible, given that I hadn't trained for it. Before the race, everyone was talking about how hard the "hill" in St. Paul is. Sure enough, people were dropping like flies there, but I was able to maintain my effort, and my splits only slowed down a little there. I ended up with only a 2 or 3 minute positive split for the race, which means I didn't fade much at all in the second half. I probably should have tried harder. But I felt really good the whole time, and didn't feel "the wall" until about mile 24. When you're that close, the wall doesn't really matter. Your brain can keep your legs moving at a decent rate for the last 2.2 miles. I chugged my free beer, got on the shuttle bus and away from the chaos near the finish at the Capitol building, and went on home. No big deal. That's the way I like it.

The last hurrah of the year came just a few weeks later at Ice Box 480 in River Falls, WI. This is an 8-hour race on a 7-mile long mountain bike trail loop. It was a lot more technical than I anticipated. Nothing like the Superior Hiking Trail, but still, roots everywhere. You couldn't take your eye off the trail. Even though I kept my eyes on the trail, I managed to fall twice. The second one was pretty hard, and I ended up on my back, feeling like a turtle because of my pack, which I still haven't washed. But no harm done. I did well in this race, completing 6 loops for a total of 42 miles. I've noticed that in terms of place for these timed races, I finish a lot higher than I do in any "normal" race. Throughout 2015, I worked my way up to what is definitively the mid-pack, even cracking the top 50% for my age/gender a couple of times. In the 2 timed races that I did (FANS and Icebox), I finished in the top 20%. I'm not sure what this means. After FANS, I thought I'd never do another timed race again, that I hated it, and that it was just stupid, but now I'm not so sure about that. Maybe I should give them another chance. Maybe it is my density. I mean, my destiny.

Joining Break the Stigma has just been amazing. Julio and Kevin and great to work with. I know that most of our focus has been on podcasts, and the response has been great. We're going to wrap up "Season 1" in the next couple months so that we can focus on the other stuff that needs to be done, since it is just the three of us. 2016 is looking to be a great year for BSP, with the run across Wisconsin and so much more. Having pro runners become BSP ambassadors is so cool. Julio is the master of networking. It's unbelievable. If I send out an email and don't receive a response, it's like, "Well, he/she must hate me." Julio, on the other hand, works his magic and makes the connections. He's just awesome. Kevin is hilarious and calls out me and Julio on our bullshit. He is truly wise beyond his years. That kid has a bright future ahead of him and it's been a blast working with him. Things are only going to get better for BSP!

In early November, just before Icebox, I felt a hard bump on my upper jaw, just in front of the near. I thought it might be a knot in one of the upper jaw muscles, or from TMJ, or even a bone spur. In any case, I thought it was odd, so I had it checked out. I was referred to an ENT, who ordered a CT scan, which showed a 1 CM "mass" in my right parotid gland, which is the largest salivary gland and starts just in front on the ear, then drops down just below the jaw line. I had an ultrasound guided FNA (fine needle aspiration) biopsy done, which showed that it was a tumor and it was "suspicious for malignancy", meaning that it likely cancerous, but not definitive, and they can't classify what type of cancer it is. On December 23rd, I underwent a superficial parotidectomy, with a bit of selective neck dissection. The incision is very long and has about 20 sutures in it. I look like Frankenstein. They took out the superficial portion (outermost) of the parotid gland, with the tumor in it, and also removed a couple nearby lymph nodes in the neck, just for evaluation. The results of the final pathology were pretty good and are as follows:
I will meet with an oncologist to go over what needs to happen next, but my ENT believes it is likely that the surgery is all that was needed. So hopefully, that's it and I'm cured! In about another week I should be able to start running again, at least as pain allows. I hope to get back on track soon, because I've got big plans for 2016.

My plans are subject to change of course, depending on if further treatments are needed. Other than Voyageur, these races are pretty expensive. I will likely be using my Christmas cash for race entry fees. So thank you for the Christmas cash! And for all the other gifts, of course. :)

I really don't ever want to run a race shorter than 50-miles. Shorter races are painful, because I don't have the self control to just relax and take it easy. 50 miles on a tough trail forces you to dial it back. During shorter races, I never reach that zen-like state where I can stop judging myself. As such, I don't find them to be very rewarding.

Cheers to all of you. I hope you had a wonderful holiday season and wish you all a happy new year and a prosperous 2016!